“One of those you-gotta-see-it-to-believe-it bands that only comes along once in a great while.” – Jersey Beat

“The King and Queen of Audience Interaction” – I Heart Local Music

“The love child of Atom and His Package and the Aquabats.” – Punk Rock Theory

“DNA take one of American’s greatest forms of expression, folk music, flips it on its head & kicks it in the ass.” – DIT Kalimazoo 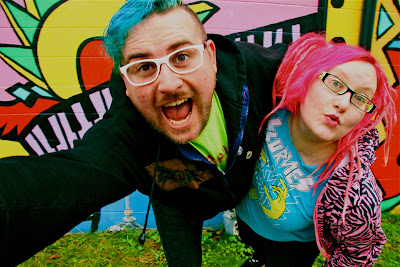 GLOW IN THE DARK

Glow In The Dark, in some ways, represents the best of what our band, Destroy Nate Allen, has been. We have performed most of the songs on Side A hundreds of times; these are the requests – “White Flag”, “Jesus, Keep Us Safe From The Cops,” “My Parents Managed Apartments” – and some of our favorite songs: “Loving You Means Everything” and “Recipe.”

For the last several years we have been exhausting our artistic life force, traveling the country and singing our hearts out as a duo. But before that, Destroy Nate Allen was a bare bones, confessional solo project. This is reflected on Side B, which features some of my least favorite songs to play live such as: “Asshole” and “Last Call.” These songs represent the hard times, the struggles, my fears. Nevertheless, the album ends as it should, with laughter and loud crowd participation.

We are super excited to finally have this retrospective collection see the light of day. Most of these recordings are far out of print and or have never been officially released. It is hard to say what the future holds, but we are so thankful for your love and support that has allowed our extroverted folk punk theater to exist. – Nate Allen

Glow In The Dark is a 12-track collection of Destroy Nate Allen favorites, brought to you by Vinyl Remains and released on a 10″ highlighter yellow and hot pink vinyl record. The record comes with two full album downloads; 1 album download is ripped directly from the vinyl and the other is of your standard mp3 fair. Only 300 records have been made! This is our first ever full length collection of songs to make it onto vinyl and we are very excited.

“It’s entirely impossible to not smile” – Song from the Road

“Self-confessed ‘kid songs for adults’ that bares anti-folk similarities to Moldy Peaches or The Meat Puppets curating Sesame Street.” – God is In The TV (UK)

“Folk punk has never been more fun until now!” – No Gods No Masters

“Their raw, noisy, punk-influenced storytelling brings me back to a time when going to shows and making friends was more important than the sonic quality of a recording or how it held up against the great recordings in rock ‘n roll history.” – Tangzine

“One of the best cd’s to brighten my doormat in ages.” – Burning World (UK)

“When the band excels at being unusual, they soar.” – Punk News

“You guys lived up to everything we’d heard! …. A Punk Rock I Love Lucy” –Andrew Jackson Jihad

“It was lyrical. It was physical. It was in your face, They did what they had to do AND IT WAS GOOD!” – Strictly Beats (The Moldy Peaches)

“This is music that anyone can appreciate” – Room Thirteen (UK)

“It’s like all the forces of nature combined to make this exactly the sort of thing you can’t help but get behind. “ – Dying Scene

“It was just so much fun, everyone at Wonder Fair was smiling ear to ear. It might be a while, but I’m definitely gonna be ready the next time these guys come through here. And next time, I’m bringing everyone I know. ” – MTYMNHKA

“Nate and Tessa have amazing chemistry – I feel almost like an eavesdropper, listening to them sing about their love.” – Crappy Indie Music

“Nate and Tessa – create acoustic tripe that’s one half PBS after-school tunes for adults and the other half local community theater set to music.“ – HM Magazine

“Truly, there’s no other band out there like this.” – Faster and Louder

“This really is something different, and will sit among your punk and pop albums. So, grab a beer, grab your guitar and put this CD in and join in!” –Punk Globe

“Why even continue to call your self a punk act when clearly you are playing joke songs with only an acoustic. Where is the pissed off lyrics and distorted guitars and blistering drums.” – Spunkzine

“Allen spun and karate kicked in a one-man mosh pit, and was completely drenched in sweat by the end of the set.” – Hey Reverb (Denver Post)

“They sound like they’re having a good time and they want everyone to have a good time with them and they’re going the right way about it.” – Alt-Sounds (UK)

“This adorably married couple from Portland, Oregon represent everything that I love about truly great punk rock. They screamed, they jumped around (a lot) and they had more fun than anyone within a five mile radius. This wasn’t so much them putting on a show as having a blast with a bunch of old friends they just met. They ran around the inside of the circle they had created, singing in peoples’ faces and getting the crowd to sing along with them. They sang songs about eating more vegetables, songs about love and songs about which one of them was more punk rock (this tour it was Nate). Despite knowing who was coming next, I was genuinely sad when their set ended. Destroy Nate Allen are definitely a must see if they ever come back to Chicago.” – Windy City Rock

WITH OUR POWERS COMBINED

Since 2007, married couple Nate and Tessa Allen joined forces as “Destroy Nate Allen” an interactive, sing-a-long, folk punk band. In these five years, they have set foot in forty-eight states, released six full length albums, and played over 700 shows. Their process has allowed them to do (almost) everything in their power to show people a good time with simply two voices and a guitar.

Destroy Nate Allen decided to try something different for their seventh full length, With Our Powers Combined. They asked Gnarboots (Asian Man Records: former members of Link 80 + Shinobu) to add a full band dose of crazy – and it worked!

With Our Powers Combined features DNA’s fun captured in a whole new and stunning form. The album was fan funded via kickstarter album pre-orders, and was then recorded to 2” tape by Jack Shirley (Comadre) at The Atomic Garden (Classics of Love, Joyce Manor, Broadway Calls).

“We have a blast traveling together and playing rock n’ roll, but we’ve had trouble capturing our live energy so we asked our friends for help,” stated Nate. “We flew to the Bay Area and tracked fifteen songs in three days. We were able bring in a horn section (SKA!!!!) to pull off wild concepts that went beyond the scope of our traditional stripped down approach. We are proud of the album and we can’t wait to show everyone!”

There’s very little that’s typical about folk-punk duo, Destroy Nate Allen. It’s not just their unique blend of folk, punk rock, campfire songs & foot-stomping country jams that set them apart; it’s their live performances—which are unlike any other bands’ out there.

“At this point pretty much every show involves: sing-a-longs, circles, very personal interactions, improv theater moments, marriage counseling, and as much punk rock as we can sweat out,” says guitarist/vocalist Nate Allen, who is accompanied by his wife Tessa on tambourine and vocals.

Right at the onset of the show, the audience quickly realizes they are in for something completely unlike the standard, run-of-the-mill, live-band performance. Nate and Tessa position themselves on the floor—even at venues with a stage—and have the audience make a circle around them, instantly shaking the audience awake, requiring their participation as much as the band’s.

“I don’t like the audience/performer barrier and I want to do away with it when at all possible. We are also trying to empower people to feel more joy and (do sillier things) than they would ever dream of doing at a show,” says Nate Allen.

Things only get weirder from there, as Nate and Tessa run back and forth inside the circle, not using microphones or amps, often singing inches away from members of the audience—in some cases going right up to people and touching them. But the goal for Destroy Nate Allen isn’t to make people uncomfortable—it’s to make them happy. Sometimes that means pulling people out of their comfort zone and reminding them what it feels like to be a kid.

“My favorite live shows were always the ones where I walked away feeling like I’d spent my time well. This often meant wearing home a huge smile. So I guess I’m just trying to be like my heroes and show people a VERY good time,” Nate Allen says.

Since Destroy Nate Allen are trailblazers in a category of their own, they are often left doing everything themselves—including booking tours, promotion, recording albums. They do it all!

“I don’t think DNA has ever really been DIY by choice per say. We’ve self-released most all of our music because no one has stepped up to help us out and so I’ve just gone ahead as best I could,” says Nate Allen.

Being so thoroughly independent has afforded them the freedom to grow and change in ways that has preserved their unwavering uniqueness, something they are extremely proud of.

“Being DIY has made us the band we are… being stretched and hungry has made us an intense live show and lead us to constantly reinvent ourselves over the years. Besides the shows, our tours generally consist of hanging out with as many people as possible and trying to recognize teaching moments as they come along. I guess this is what happens when two extroverts get married,” Nate Allen says.

WHO IS NATE ALLEN & WHY DO YOU WANT TO DESTROY HIM?

Known for connecting deeply with an audience, Nate Allen is highly effective at crafting addictive sing-a-longs and performances that are hard to forget.

His solo acoustic songs contain elements of indie folk, working class country, blues, and punk rock and provide an outlet for Nate Allen’s somber, sensitive side. He sings with a confessional humility that engages the humanity in all of us.

“An honest and uncomfortable reality check” – The Huffington Post

“A nice balance between kooky and cool.” – Golden Mixtape

“One of the hardest working and original songwriters in American DIY.” – KPSU Portland

In 2015, Nate Allen (of zany duo Destroy Nate Allen) released and toured on his new album Take Out The Trash. He is currently working the follow-up for 2016. Nate is looking to book festivals and events of all types nationally and internationally in 2016. He is based in Kansas City.

Nate grew up in Roseburg, Oregon, a medium size timber town Johnny Cash sings about. From 2002-2004 he ran a non-profit called Rock4Reason throwing all-ages (mostly hardcore) concerts. Many of his early ideas about how to connect with a crowd from throwing those shows. Here is a somewhat incomplete list of the friends he made through Rock4Reason: